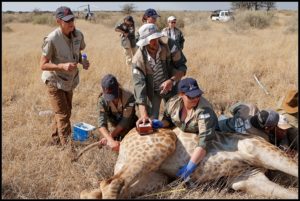 Burly arms thrust upward against the giraffe’s neck, giving the animal impetus to scramble to its feet. The 30 or so humans standing back to give it space applaud briefly as it canters away, but there’s no time to reflect on success, no time to even think. The chopper pilot is already reporting another giraffe nearby and lands quickly to pick up the vet who will dart it.

The remaining people sprint to the vehicles that are soon dashing across the veld towards their next subject.

“Dart’s in!” At 6:42 a.m., less than 40 minutes after darting the first giraffe, the capture team in the leading pickup race to guide the second giraffe as it falls onto its side. They restrain its legs, raise its neck on a wedge-shape platform to help its breathing, and cover its eyes and stop its ears with cotton wool to minimize stress.

“Two minutes down!” comes word from Andy Tutchings, one of the men lying across the giraffe’s neck, his eyes on his stopwatch. More than a dozen humans are scurrying around, taking the animal’s temperature, measuring its hooves, testes, scrotum, ossicones. A slight, gray-bearded figure with a clipboard records the measurements as they’re called out to him, his eyes shielded from the early sun by a Save the Giraffes baseball cap. Others are collecting ectoparasites, a hoof clipping, samples of blood, hair, feces, and finally the big one: semen. It’s the first time ever that semen has been collected from a giraffe in the wild. 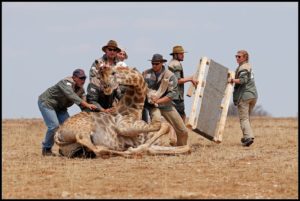 All the while, the crew of the producer Ashley Davison who made “Last of the Longnecks” are now also making a new documentary called “Catching Giants” (Teaser: https://vimeo.com/220655480) were filming the whole event, dodging out of the way of the data-gatherers. Above the scene, their drone is making its own recording, capturing the humans’ fast, deliberate movements as each accomplishes swiftly and efficiently all that needs to be done. An observer could be forgiven for thinking that this large team was well-practiced, had done this many times before; few would believe this was only the second giraffe they were collaring.

“Eight minutes down!” At the giraffe’s head, team leader Dr. Francois Deacon is monitoring its breathing, watching for signs of distress, liaising with the wildlife vets, calling for water to keep the animal cool, instructing bushes to be sawn down to clear a path for the giraffe’s getaway.

“12 minutes down!” The three-man collaring team puts finishing touches to fitting the halter-like GPS collar snugly but not tightly between the giraffe’s ossicones atop its head. Weighing only 600g, the collar is less than 1% of the giraffe’s body weight.

“14 minutes down!” The veld is cleared of all paraphernalia and the data collection team move back towards the vehicles.

And the second giraffe rises, unsteady as a calf taking its first steps, before cantering away.

That 5-4-3-2-1 mantra was repeated nine more times before nightfall, and again and again on the days following, until the collars were used up and there were no more hours in the helicopter’s fuel tank, despite volunteered top-ups. Each time, the giraffe scrambled to its hooves and cantered towards the horizon, minus a few tail hairs, drops of blood, ticks, a hoof clipping. Not all went as smoothly as the first two. One female fell onto a low, thorny bush and had to be winched clear so that they could work on her. Another got up more quickly than expected, throwing the restraining team into another thorny bush. They emerged laughing, happy to have suffered no more than scratches.

By the end of that first day exhaustion ruled, beer spilled as hands and heads drooped around the campfire, tired bodies dragged themselves into the tents. But in pre-dawn darkness the next morning they were ready again, making plans by headlamp before the convoy of four pickups filed out of camp.

The giraffe-collaring exercise took place in Rooipoort Nature Reserve in South Africa’s Northern Cape Province on a scale never seen before. De Beers are playing a pivotal role in saving giraffe from extinction. Under the aegis of the University of the Free State’s (UFS) Faculty of Natural and Agricultural Sciences and the leadership of Francois, some 30 people from many branches of science had come together to find answers to basic questions about giraffe biology—and to more complex ones about conservation programs and the management of giraffes. It was an ambitious effort. Francois had voiced pre-action nerves the previous afternoon when the team’s tents had gone up in a large circle and flags had been distributed to mark the nationalities of their occupants—German, Dutch, British, the Stars and Stripes, Texan and, of course, South African. “There are too many people,” he worried. “They’ll all get in each other’s way.”

The events of the following day proved his fears groundless and that the size of the team was not unwieldy. In fact, each member—biologist, grassland scientist, GPS/GIS specialist, acoustic specialist, zoologist, wildlife veterinarians, reproductive physiologist, endocrinologist, soil scientist, animal behaviorist, geneticist, biochemist, animal welfare advocates, and bioengineers—had a role to play. And working together for a common cause—giraffes—they found themselves discussing overlapping areas of interest, exchanging ideas, building a big picture.

Almost unnoticed, Africa’s wild giraffe population has dropped by roughly 40% in the past 30 years, so the kind of exercise undertaken by the UFS-led team has a certain urgency—and particularly in view of the multitude of gaps in current knowledge about the species. There are, for example, many questions about reproduction. Postdoctoral fellow Tanja Wolf from Germany will study the fecal samples collected to get a better handle on females’ estrous cycles and when males reach reproductive age, as well as DNA to establish which males are siring the calves and whether dominance is a factor. She will stay in the reserve for a full year to continue her research, as will PhD student Ciska Scheijen from the Netherlands, studying levels of stress experienced by giraffes.

Biochemist Prof. Gary Osthoff of UFS will compare milk taken from pregnant females with milk taken from nursing cows to establish any changes in quality and composition, while Master’s students Amaria Janse van Rensburg and Jamie Paulse will look at the giraffes’ parasite loads and body condition, along with preferred habitats and their vegetation quality. Animal behaviorist Fred Bercovitch (he of the gray beard and Save the Giraffes cap), among others, will study what the all-important GPS collars reveal about the movements and home range use of both males and females with Prof Nico Smit zooming into the habitat qualities and Hennie Butler focusing on the behavior and thermoregulation.

And then there’s that groundbreaking collection of semen samples by reproductive physiologist Ilse Luther. The prospects are exhilarating, and it wasn’t long before Ilse was sharing her excitement with the entire team back at camp, where an RV-sized trailer had been set up as a mobile lab that maintained to the highest standard the integrity of all samples collected.

There’s no denying that valuable research has already been done on giraffes so far—Francois had previously captured some 40 of them successfully and collected important data. But most of the avenues being explored as a result of this exercise are novel and will contribute a vast amount to the body of knowledge about giraffes. And with that knowledge will come not only insights into how populations can be managed (especially in South Africa where they live in fenced, fragmented reserves), but also a more precise understanding of the factors that regulate giraffe demography and reproduction. Importantly too, with each capture, techniques are improved and risk to the giraffe is lessened—happily, on this exercise every single individual got to its feet none the worse for wear, and all the cows were reunited with their calves.

Reflecting on the experience as he drove homeward, Francois declared himself well satisfied with the results and excited about the prospects for conservation, though with the greedy intellect of a true scientist he admitted that he would now probably have more questions than answers. He sounded pleased. Were plans for the next big data-gathering trip already stirring in his mind and De Beers definitely will be playing a huge part in it….

More of this could be found at: https://www.ufs.ac.za/templates/archive.aspx?news=10285&cat=1